As early as 1499 there was a confederation of the peoples in what is now Switzerland, and this can be considered the origins of the modern Swiss state. Despite the wars that have surrounded it, and been aimed at it, Switzerland has remained remarkably independent, with the exception of the French conquest by Napoleon Bonaparte in the early 19th century. This did not last long however.

Switzerland has always been a country where various nationalities and cultures have met, and its contributions and achievements have been enormous. In addition they escaped active involvement in both recent world wars, so that they have experienced little physical destruction. Thus there are some things of great interest to be seen in the history of biology and medicine. The capital of the confederation is Bern, but there are other major cities from which visitors may more easily orientate themselves. Despite its mountainous terrain, the roads and railways are excellent.

Location – 90 kilometers north of Bern.
Train – From Bern and other cities direct.
Road – Take the N2 Autobahn north from Bern.

Basel is at the point where Switzerland, Germany, and France meet, and is at the head of the Valley of the Rhine. Because of its location, Basel has for a long time been a crossroad of commerce. From our point of view, however, it is of great interest that in the 16th century Basel became the foremost printing center in the world, and it was here in 1543 that Andreas Vesalius (see under Padua, Italy) came to have printed his great anatomical work, “De Humani Corporis Fabrica”. Basel has since been superseded by other printing centers, but fortunately Vesalius left his mark.

This is a teaching museum of anatomy, and can be seen only by permission of the director of the institute. However, this is usually granted, if it is not in use. Of special interest in this museum is a human skeleton, which Andreas Vesalius dissected as a demonstration for medical students when he visited Basel in 1543, and then presented it to the university. It is perhaps the oldest surviving human dissection in the world. It has been somewhat “beaten up” through the centuries, but there is no doubt it is the original. It is marked as follows:

In translation this reads:

This skeleton was given by the master of anatomy,
Andreas Vesalius of Brussels, to this University, when
he stayed in Basel in 1543 in order to attend to the
publication of his great anatomical work.

This is a magnificent medical historical library, and may be seen by permission of the librarian. It would be a pity to miss it while in Basel.

Location – 170 kilometers southwest of Bern.
Train – From Bern and other cities direct.
Road – From Bern take the N12, N9 and N1 Autobahns via Laussanne to
Geneva.

Geneva is situated at the west end of Lake Geneva and is said to have one of the most beautiful locations of any city. It has a long cultural history, and is a very pleasant place to visit.

This is a small but excellent museum of the history of science, set in a park on the sores of Lake Geneva. Of its many exhibits two are of great interest in the history of medicine and biology: 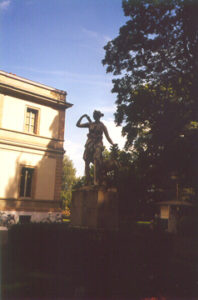 Location – 120 kilometers northeast of Bern.
Train – From Bern direct.
Road – Take the N2 Autobahn north from Bern, and then branch on to the N1 to Zurich.

The origins of Zürich go back to Roman times, but more recently it has become the major commercial center of Switzerland, with a culture to match it.

Universität Zürich
Rämistrasse 71
Zürich
Opening hours:
Mondays and Thursdays, 14.00 – 17.00
Saturdays, 10.00 – 12.00
Small charge for admission.
Rämistrasse 71 is the main building of the University of Zürich, and the
historical medical museum (also called “Oeffnungszeit Museum”) is
on the fourth floor.

It is really remarkable how few good historical medical museums there are, but this is certainly one of them! It is large, rich in its collections, and the exhibits have been displayed by experts with a “loving hand.” Virtually everything is in glass cases, easily seen and carefully labeled, so that even a person with no medical knowledge can get a great deal from the displays. We think it is important to give an idea of the comprehensiveness of this museum, so some of the displays are listed below.

1. Early medicine in Africa.
2. Early Christian medicine.
3. Ancient Egyptian medicine, with copies of the Ebers papyrus and other
medical treatises.
4. Ancient Peruvian medicine.
5. Ancient Roman medicine.
6. Skeletal models showing tremendous progress around 1550.
7. Comparison of teaching models from 16th, 17th, and 18th centuries.
8. The switch of emphasis from anatomy to physiology in the 19th century.
9. Collections of stomach pumps, syringes and instruments used for
tapping in pleurisy.
10. Apparatus from psychiatrists’ clinics of the 19th century.
11. Superb collections of old medical books going back to the middle
ages, which are displayed.
12. Comparison of the anatomy of Vesalius (1514-1564) (see under
Padua, Italy) and Eustachius (1524-1574) with skeletons of the
15th century. This demonstrates a marked and sudden change
for the better in the 16th century.
13. Surgical instruments of all types from many centuries.
14. Instruments for treating wounds.
15. The development of crutches, artificial limbs, etc.
16. History of anesthesia apparatus.
17. Displays devoted to Louis Pasteur (see also under Arbois, Dole
and Paris, France) and Joseph Lord Lister (see also under
Glasgow, Scotland).
18. Early x-ray apparatus and photographs.
19. Instruments and illustrations for cataract operations.
20. Development of spectacles in the 18th and 19th centuries.
21. Early iron lungs.
22. Extensive collection of dental instruments.
23. Displays illustrating the development of obstetrics, including lying-in
rooms and childbirth chairs.
24. History of goiter.
25. History of syphiology.
26. History of tuberculosis.
27. Complete display of an apothecary’s shop.
28. An original coffin of the 14th century with a hinged bottom. This has
a grim history. At the time of the great plaque, deaths were so
frequent and coffins in such short supply, that they were made with
hinged bases. The dead person was put in the coffin, which was
then transported to the cemetery and placed over the grave. The
bottom was opened, the body fell into the grave and the coffin
simply used again.
29. Portraits and short accounts of famous doctors.

There are many more displays in this superb museum, and we cannot recommend it too highly.

In the same building as the medical museum is an Institute for the History of Medicine, and is well worth a visit in conjunction with the museum. There is a superb library on the history of medicine, as well as some very rare old medical works. It can only be used by qualified scholars, but visitors can ask permission of the librarian to see it.